OBAMA: Another left handed to rule the world 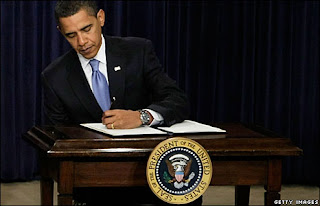 Is it a just a weird coincidence that six of the last 14 American presidents have been left-handed? And now add president Barack Obama to make it 7 out of the last 15. This is a very interesting statistic considering that approximately 10% of the total population is lefthanded.Have you heard of the old adage "lefties are the only ones in their right minds"? So is there something to it? Are there significant personality trait differences between righties and lefties?

Here are some interesting facts:If you're left-handed, your personality traits may include resiliency & independence. Here are a few fascinating facts about left-handed people.First, Some Left-Handed Statistics About 10% of the world’s population is left-handed. There is a genetic component that determines right versus left-hand dominance, and it’s called the LRRTM1 gene. People with this gene are more likely to be lefties.The speech centers of right-handers and most left-handers are in the left brain. The left brain focuses on syntax and order, while the right brain monitors context and emotions.Some of us are “mixed-handed” people, which means both hands are used equally.

Psychological Characteristics of Left-handed PeopleLeadership. About 66% of American presidents in the last 30 years were left-handed men. Bill Clinton, George H.W. Bush, Ronald Reagan, and Gerald Fold were all left-handed presidents. Barack Obama and John McCain are both left-handed.Quick thinkers. Studies have shown that lefties are “exceptional.” (wikipedia)

Personality Traits of LeftiesIndependence: Some experts believe left-handed people are more independent because they’ve had to get along in a world that’s not made for them. Dr Peters says that lefties are “slightly more resistant to social pressures, to have more of an independent streak.”Adaptability: Canadian research shows that left-handed people are more adaptable than right-handed people. That is, a lefty can use her right hand to do tasks much easier than a righty can use his hand. Left-handed people seem to be able to switch over more easily.Generally, Southpaws are thought to be more flexible, highly intelligent, and more resilient than right-handed people.So there you have it! The quick thinking, adaptable southpaws hold the world in their LEFT hand.(washington observer)

Back To Top
Copyright © 2014 Harans. Designed by OddThemes