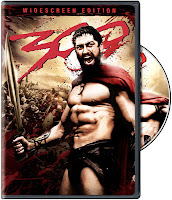 a great historic flim after long time. lot of aspects of the movie made me to recommend as a great one.

300 is a 2007 film adaptation of the graphic novel of the same name by Frank Miller, and is a fictionalized retelling of the Battle of Thermopylae. The film is directed by Zack Snyder while Miller served as executive producer and consultant. The film was shot mostly with a super-imposition chroma key technique, to help replicate the imagery of the original comic book.
Spartan King Leonidas and 300 Spartans fight to the last man against Persian 'God-King' Xerxes and his army of more than one million soldiers. As the battle rages, Queen Gorgo attempts to rally support in Sparta for her husband. The story is framed by a voice-over narrative by the Spartan soldier Dilios . Through this narrative technique, various fantastical creatures are introduced, placing 300 within the genre of historical fantasy.(wikipedia)

Back To Top
Copyright © 2014 Harans. Designed by OddThemes